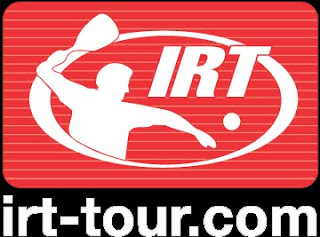 The IRT kicked off the 2009-10 season in downtown Denver September 9-13 at Skyline Park and the 16th Street Mall. The event was the Motorola IRT World Racquetball Championship presented by Verizon Wireless. It was be held outdoors and played on the all Lucite stadium court. Hats off to Eddie Meredith and his crew for setting up the court. They put in 14 hours a day to build the stage for the IRT players to showcase their skills.

This was the second year for this event and was a very successful event.The tournament experienced a first in the sport of racquetball as we had to reschedule out Saturday semi-final matches to Sunday due to rain. The players then had to play the semi's and final on Sunday.

Kane Waselenchuk won the event again playing some great racquetball all weekend. Kane played Jack Huczek in the final and the match was a good one and will most likely begin the rivalry that had been created in 2005 and 2006 between these two. They would meet again in the final at the Lawler Sports Pro Am the following weekend September 19-20 in Terre Haute Indiana at Indiana State University with Kane winning again.Playing at ISU was a great experience and great exposure for the sport and the IRT. The event was well run by Manny Rodriguez and the Indiana Racquetball Association.we look forward to coming back again next year.


Both events were streamed live on www.IRTnetwork.com. The IRT Network is a new partner of the IRT and will be streaming our upper tiered events this season.The coverage was excellent and commentary by John Scott was fantastic. I hope you all subscribe to the new network and catch all the IRT action this season

Both events were missing two of its star players. Alvaro Beltran suffered an knee injury lin late August and could be out for the season. Beltran is scheduled for surgery this week to repair his ACL and meniscus tear.Ben Croft will be out for three events due to a suspension handed down by the IRT board after an incident in Chicago. Ben will be back in action at the US OPEN. Both players will be missed but it will open the door for some new stars to shine on the tour. Juan Herrera took advantage and made his first quarterfinal of his career in Terre Haute, eventually losing to Kane. Juan has always played tough on the tour and his play at ISU proves that he has what it takes to be a top eight player on the IRT.

We will have a satellite event in Kansas City September 25-27 then we are off to Bowling Green Kentucky and Western Kentucky University for our next tier one October 9-12.

Keep your eyes on the IRT website for updates. www.irt-tour.com and remember to catch all the action at www.irtnetwork.com
Posted by Mauro at 12:53 PM