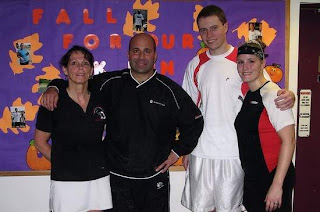 Apperson, a 2006 Rosecrans graduate and senior at Baldwin-Wallace College, teamed with Doug Ganim of Westerville to claim the Men's Open Doubles title and Tracy Hawthorne to capture the crown in the Mixed Open doubles division.

In the open division, Apperson and Ganim defeated Rance Mack and Jim Bronson 15-6, 15-8 in their first match and picked up a 15-5, 15-10 victory over Andy Kulbach and Fabrizio Mora in the second match. Their third match featured a 15-2, 15-1 decision over Charles Knight and Clint Wolfe followed by a 15-1, 15-1 win over Vinnie Shoemaker and Justin VanTrease in their final match to win the title.

Apperson and Hawthorne opened with a 15-8, 15-3 decision against Mike Murphy and Melissa Bentley in the Mixed division. The second match took three sets before they prevailed 4-15, 15-8, 11-10 over Bronson and Lesslie Messmer, and they won the crown after a 15-14, 15-2 victory over Ganim and Cindy Tillbury.