Saunders shows who's boss, on and off racquetball court in Manitoba Canada 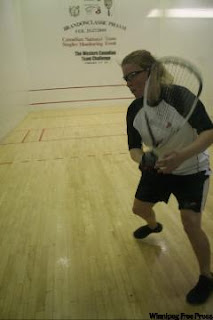 It was Jennifer Saunders' tournament, so why shouldn't she make herself the No. 1 seed in the Manitoba Open men's open division? As executive director of Racquetball Manitoba, it is Saunders' job to seed the entrants, but before anyone begins shouting foul, consider this: she was right on the money.

"Racquetball Canada has a system that I follow," explained Saunders, "but yeah, I do all the draws."

If there was any doubt about her lofty standing, Saunders erased it in Sunday's championship final when she took only half an hour to defeat No. 3 seed Neil Dempsey, 15-1, 15-6.

"It felt like a few more (mistakes) in the second game," laughed Saunders. "I'm really working on consistency, and moving well, so that I can hit the shot that I want to hit when it is there."

Dempsey said his game plan was to try and neutralize her serve. "Because once the rallies are going, you know, if she is not completely on, there is a chance you can win the point. But neutralizing her serve is a big thing to do. She hits the ball really, really well."

"My strengths are strategy," said Saunders. "I try to find a weakness and pick on it. I'm not a dominant server, so I try to serve it so I get a weak return, and then capitalize on that. On the pro tour I am not one of the hardest hitters, that's for sure. I train every day, and I work at my fitness every day, so I am hitting it harder than ever."

Saunders has to travel quite a bit in order to play full time on the professional tour, but that is where she gets most of the competition she requires to keep her at the top of her game.

However, every now and then, she simply picks up the phone and gets her favourite sparring partner, Manitoba Sports Hall of Famer Sherman Greenfeld, off his duff and out to the court.

"Sherman is not playing tournaments right now, but I get him out every now and then for a drill session," she says, adding that Greenfeld, whose 22-year career included 20 provincial, 10 national and two world championships, still beats her pretty handily.

"You know, he can step away from the game for six months and still come back and beat you," she said. "He's pretty amazing, but he is willing to get on the court with me."

Saunders said that when Greenfeld was winning championships, he was in a situation similar to hers. "He had to train (here) with players who weren't pressuring him, so he played a lot of two against one (cut-throat). He just worked really hard and he was able to do it, so I never really worry about it."

Competing in tournaments such as the one this past weekend gives Saunders a chance to relax and have some fun, while still working up a sweat. "It is fun, and it is a challenge. So I really enjoy it because there's no pressure and I get to play for fun."

In three weeks, it's back to work, as in mid-December she's off to Arlington, Va., for a pro tournament. "So, I have two weeks at home to train for that."