Bolivia wins all the gold medals in Racquetball 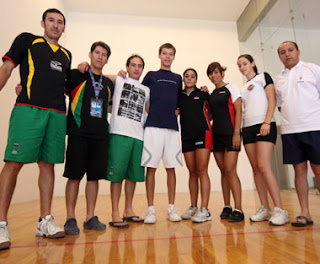 In the city of Sucre, Bolivia, the Bolivian national racquetball team dominated the XVI Bolivian Games. Bolivia won all the gold medals in all divisions and once again confirmed that racquetball is one of the countries trademark. They won seven gold medals in total and the hero was, for the third time on the roll, the player Ricardo Monroy. Ricardo also was a key element on the success of two other great players that also brought gold to Bolivia, Carlos Keller and Jorge Zambrana.
On the women's division Bolivia also proved its supremacy with Jasmine Sabja, Jhenny Daza and Carola Loma. Jasmine was the best female player on the team and won two gold medals. The great performance of Jhenny Daza was also crucial for the gold on the team draw.
Overall racquetball was the sport that gave Bolivia the most medals on the XVI Bolivian Games. Congratulations to all the players from Bolivia and their staff.
Posted by Mauro at 9:54 AM