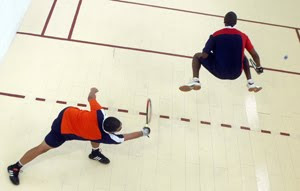 Nolsen Jimenez wins the title at the V Volveran Cup on November 25 th that took place at the "Universidade de las Ciencias de la cultura Fisica y el Deporte Manuel Fajardo".
Nolsen bit Maykel Moyet that was unbeaten on the previous cups and considered the favorite in only two games. The score of 15-3 and 15-6 showed the dominance on Nolsen over the favorite Maykel.
After the match Nolsen said" I walked into the court to win the match. I felt really good but I knew that Moyet is the best player in the national team and it was not going to be easy. I tried to be very careful in every shot and I tried to take advantage of the ceiling shots given to me."

The bronze medal was a battle between Raul Martinez and Enier Chacon that are also teammates in Cuban national team.

In the women's team Marialis Alvarez won for the third time, biting her national teammate Maria Regla Viera in only two games. Maria is the third best junior in the world. The score was 15-1 and 15-7.
The bronze was another battle between two junior players Yilian Lorente and Disney Linares.

Guillermo Marrero, the racquetball commissioner fro Cuba in interview with a radio station from Cuba, after the medal ceremony, mentioned that " We had some problems to make this cup happen however we were able to do it and the objective was accomplished. The Cuban coaches were able to see the mistakes from some of the players during the matches and will be able to work with the players so the mistakes can be corrected."

The next Cuban national event will be a cup that will take place on December 14 until December 21. The next event will be a doubles tournament in the same facility.
Posted by Mauro at 8:11 AM