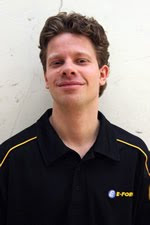 Zoetermeer's Pascal Matla is the winner of the 2009 Dutch National Championships that were held last weekend in The Hague. He defeated is doubles partner Edwin Schipper in 2 straight games to win his 7th National Singles title. With this years' victory, Pascal breaks an old record from the early 80s, when Ton Luykx was able to win the Dutch Nationals seven times as well. Congratulations Pascal!

More information on Dutch Racquetball can be found at http://www.racquetball.nl/.
Posted by Mauro at 6:33 PM