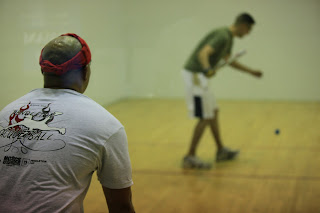 MARINE CORPS BASE CAMP PENDLETON, Calif. — More than 30 competitors from units on Marine Corps Base Camp Pendleton participated in the 2010 USAA Pendleton Cup Racquetball Tournament at the Paige Fieldhouse, Jan. 27.
The event was organized by the Marine Corps Community Services Athletic Department and it was only aimed at Marines and sailors stationed on Camp Pendleton.

“The tournament contributes to our military community by bringing out the best athletes in racquetball,” said Eddie Bolanos, Paige Fieldhouse sports coordinator. “It brings out the thrill of being the last one standing after a grueling cardio-vascular workout.”

After many hours of intense competition, the elimination process brought participants to their last game.

“This tournament has put together a lot of skilled people,” said Pfc. Peter Ninnemann, data network specialist, Combat Logistics Regiment 15. “Competition got harder and harder as we progressed with the matches.”

Marines and sailors were able to take advantage of this tournament in many ways, said Bolanos. Racquetball works on your hand and eye coordination, your physical fitness stamina and, most importantly, it builds on teamwork and esprit de corps to represent your unit, he added.

All participants must be active-duty military.