News from Canada-Pan Am time for Saunders again 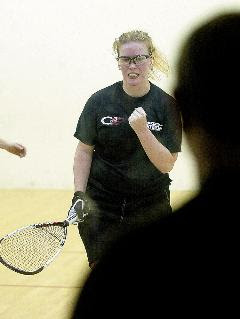 It has become an annual trek that Jennifer Saunders is proud to make for Canada and she'll make it again this year.

With the win, she qualified for the 2010 Pan American Racquetball Championships in San Pedro, Honduras, March 24-April 4.

The Racquetball Canada website notes an alternate site of Sucre, Bolivia has been secured in case of "ongoing political unrest in Honduras."

The location won't matter to Saunders who will compete in her fifth straight Pan American Championship. That event will be main qualification event for the 2010 World Racquetball Championship in August in Soeul, South Korea, which is Saunders' ultimate goal for this year.

"It means that I'm establishing that I'm still the No. 1 player in Canada, and it's a stepping stone in my goal to win an international event," Saunders said.

A former resident of Thompson, Saunders won silver in the team event and bronze in the singles at the 2006 world championships.

At the 2009 Pan American Championships, Saunders reached the quarter-finals where she was defeated.

In Sunday's final, the winner was decided by a series of round-robin matches of which Saunders was the clear-cut winner going undefeated.

Saunders beat her longtime doubles partner Josée Grand'Maître of Longueuil, Que., by scores of 15-2, 15-5 and Frédérique Lambert of Montreal 15-10, 15-0. In her last match, Saunders defeated Brandi Jacobson Prentice of Montreal 15-12, 15-6 to win the event.

"The toughest one was against Brandi for sure, she played really well on Sunday and put a lot of pressure on me," said Saunders, in a telephone interview from the airport in Montreal as she waited for her flight home. She is also the defending national women's singles and doubles champion and recently was ranked No. 7 in world, the highest so far in her career.