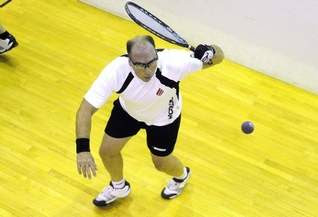 Avid fans and players traveled from 14 states, Canada and Colombia to witness seven of the top 31 professional players on the International Racquetball Tour, including third-ranked Rocky Carson.
The Ladera Ranch, Calif., resident took the men's singles pro title by defeating Ben Croft of Lake Bluff, Ill., in four sets for his first singles championship in 2010.

"We've been playing together for about six years," Carson said. "We've got a few titles under our belts, so we have a lot of confidence in each other going into any match."
Legendary racquetball player Ruben Gonzalez was also a winner, teaming up with Lewis Drug President Mark Griffin to claim the men's 45-and-over doubles title in two sets over Joe Eckert and tournament director Troy Stallings.

"It was great to be able to play with Mark," said Gonzalez, 58, who has been playing for more than 40 years. "He is such a great supporter of racquetball and does so much for the sport. He runs a great tournament. It's more relaxed and there's no pressure - you just come in, play and have fun."

Griffin says the reason that the Lewis Classic, the longest running racquetball tournament in America, has been so successful is because of the extra effort put into developing friendships with the players.
"We have gotten great participation from the pros because we make an extra effort in terms of hospitality," said Griffin, who attributes low turnouts over the last couple of years to economic challenges and time commitments.

"Some of the top pros have been coming to us for 10 years. They think this is one of the best all-around tournaments to attend because of the hospitality and because it gives them a chance at the pro level to get ready for national tournaments like the doubles in Arizona next week."
Added Carson: "The people here are always great to us. We love the support we get from the people who come to watch us."

The local success didn't stop with Griffin, as the doubles team of Bill Webb/Tom Murray of Sioux Falls won the Men's doubles title in a third set tiebreaker over Dave Dunlap and Jerry Muston.

Webb and Murray, who also play out-of-town tournaments to gain experience of championship matches, were amazed at the talent level of the professionals and their abilities on the court.

"I can't believe some of the plays they can make - the spectacular is routine for them," Webb said.

Added Murray: "It's not just that they can get to certain balls, but that they can do something with it and make a great hit."
However, the biggest - and youngest - surprise for racquetball fans was 10-year old Jordan Barth, who claimed the men's 'A' title by defeating Greg Cantine of Milbank in two sets.

"It was really cool to be able to win," said Barth, who has been playing for six years. Besides being the future of the sport, the Cold Spring, Minn., resident is also the world's top-ranked player for 10 and under.

"You have to love this tournament," said Gonzalez, who has a few years on Barth. "I love the competitiveness - it's what keeps me young. I could quit anytime, but why would I? I could still be playing when I'm 80."

article by: Justin Wulf-argusleader.com
Posted by Mauro at 8:44 PM