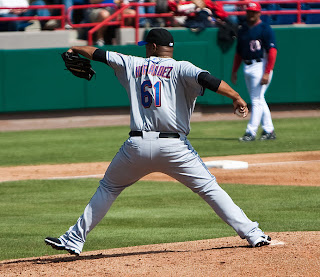 Just about everyone knows Livan Hernandez at his L.A. Fitness club in Miami, located in a predominantly Cuban area of the city. The familiarity led to a discovery that led to Hernandez arriving at Nationals spring training in prime condition. One morning this offseason, someone recognized Hernandez and challenged him to a game of racquetball. Hernandez had never played, but he accepted anyway.

Hernandez's new regimen - racquetball every morning - helped him arrive in camp in shape. After tonight, Hernandez's place in the Nationals rotation seems secure. He allowed the Yankees, playing with full lineup, three hits, two walks and one run over five innings of a 3-1 Nationals loss. He struck out three, including Mark Teixeira twice. His ERA for the spring now sits at 2.25.

By this weekend, the Nationals will decide their five-man rotation, Riggleman said. Hernandez has a chance owning in part to, of all things, racquetball. After that first game, Hernandez started playing every day, usually three or four games a day. He played eight one day. He played, and lost, against 60-year-old men, those annoying opponents who know how to play the angles and nestle the ball into corners. One ball smacked him in the face, and another left his back bruised.

"It's a tough game," Hernandez said. "It's not easy. There's a lot of good players there."

The daily games added up. Before the offseason ended, Hernandez was in great shape.

"It was important, because he was trying to get a job," Riggleman said. "If he'd have come in out of shape and said, 'Let me just pitch and I'll be ready by the time the season starts,' we couldn't have taken that chance. He came in, his weight looked, his arm was in good shape, and he was ready to go."

Hernandez's knee, which gave him problems for the past two years, feels back to normal. He feels like he added a couple miles per hour to his four-seam tonight. Tonight, he used it for his first strikeout of Teixeira.

Hernandez has a lot of tread of tires - no one in the last decade threw more pitches or more innings. But he's still 35, an honest-to-God 35, he said. "If I'm cheating on my age, I'll give you a million bucks," Hernandez said. If Jamie Moyer is still out there pitching, why not Hernandez?

"I don't know how old he is," Riggleman said. "He just found an arm slot to throw from where he's always going to be comfortable. Certain guys are like that."
By Adam Kilgore-Washington Post
Posted by Mauro at 8:39 PM