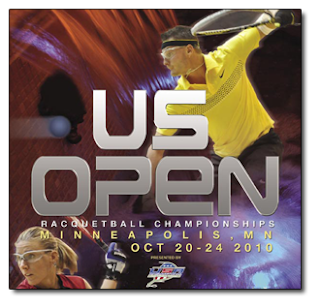 US OPEN Event Director Doug Ganim stated, “This is an incredibly exciting time in the
history of the US OPEN. Due to the explosive growth of the event, we found ourselves
with the challenge of identifying a new host city that could handle the size and scope of
the tournament now and into the future. We were already using four different clubs in
Memphis and found that we needed to add a fifth club. One was just not available.”

A long-term agreement was signed with
LIFE TIME FITNESS
and the City of Minneapolis to become the new hosts for the
US OPEN Racquetball Championships. “The facilities are absolutely amazing!”
exclaimed Ganim. “LIFE TIME FITNESS was able to provide us more courts in three of
their centers than we would have had in five clubs in Memphis, and that was just the
beginning. The quality of their centers, which are much more like resorts, is second to
none. Our players will enjoy the very finest health and fitness amenities at
LIFE TIME FITNESS.”

The main location and nerve center for the US OPEN will be located in downtown
Minneapolis at the fabulous LIFE TIME FITNESS Target Center, the same building in
which the Minnesota Timberwolves play. All pro matches and many of the amateur
matches will take place at this facility, located in the center of the exciting Entertainment
District in Minneapolis. Restaurants, nightclubs, hotels, and world class shopping are
located all around the club. Just two blocks away is the second LIFE TIME location that
will be utilized, the Minneapolis LIFE TIME Athletic Club. Lastly, a short eight-minute
complimentary shuttle ride to the third location – LIFE TIME FITNESS St. Louis Park, will
complete the rotation.

“In addition to the incredible facilities LIFE TIME FITNESS has to offer, we were
attracted to many other benefits in the City of Minneapolis, including a major
international airport, a 24-minute train ride from the airport to Target Center for just $2, a
strong corporate sponsorship community, and a high concentration of racquetball
players in Minnesota and surrounding states,” said Ganim. “The US OPEN is now
positioned for continued growth and we could not be more excited to begin this new
chapter.”

The 2010 US OPEN is set for October 20-24, 2010. An Entry Form/Ticket Application
will be released in May with complete information available after May 1st at
www.usopenracquetball.com For sponsorship opportunities or Gold Box information,
contact Event Director Doug Ganim at (614) 890-6073.

The US OPEN Racquetball Championships is wholly owned by USA Racquetball, the
National Governing Body of the sport of racquetball and Group A member of the
United States Olympic Committee. USA Racquetball is a 501(c)(3) nonprofit
organization with its main offices in Colorado Springs, CO.
Posted by Mauro at 8:49 PM