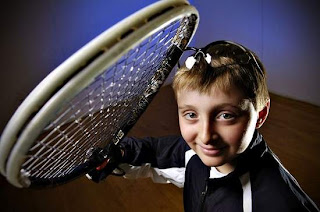 Jordan Barth, 11, on March 8 at the Suburban Racquetball Swim and Fitness, has been playing racquetball for years in tournaments
Jordan Barth never went to day care when he was younger.
No, when Barth, 11, was in need of something to occupy his time after he began walking, the racquetball courts at Suburban Racquetball Swim and Fitness became his safe place.
His mother Meadow Barth has worked in different positions for the club for the better part of Jordan’s life.
“He grew up hanging out here,” Meadow said of the Suburban, where she helps organize tournaments. “I still see people who say that they remember seeing him here in his car seat, hanging out.”
Jordan grew up within a few miles of the club and enjoyed the game right away.
“It was competitive, something to do,” he said.
Not surprisingly, both of Jordan’s parents — Meadow and Chris — are racquetball players. In fact, Chris is one of Jordan’s doubles partners.
Yes, the fifth-grader at Cold Spring Elementary School is his dad’s partner in the men’s “A” division at the Suburban. That is the second-highest level for amateurs.
National team member
That is not the most impressive part of his racquetball resume, though. In December, Jordan was on the United States team at the 2009 Junior World Championships in Santo Domingo, Dominican Republic. Jordan, the lone Minnesotan on the team, took first place in the 10-and-under gold division singles and second place in doubles with his partner Justus Benson of Sun Prairie, Wis.
It was the second straight year that Jordan has made the team. Earlier in 2009, he won the USA Racquetball Championships singles title in his division, and he and Benson took second in doubles in East Lansing, Mich.
In 2008, Jordan reached the semifinals in singles of the world championships in Tempe, Ariz., after qualifying by taking second at nationals in Concord, Calif.
“I like the competition and when I beat somebody and go on to the next round, they watch me,” Jordan said of his favorite parts about the sport. “I like when a lot of people watch me (play).”
One of the keys to Jordan being a strong player is his level of attention to his opponent. He plays in a number of tournaments where he has not played his competition before, and at world championships he often plays opponents who do not speak
article by: Mick Hatten • mhatten@stcloudtimes.com
Posted by Mauro at 6:44 AM