Roth recognized for devotion to racquetball 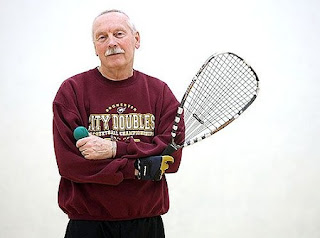 The story line: Rochester man Jim Roth has been playing racquetball in amateur tournaments for 26 years, and has also provided financial sponsorship for local tournaments. He will be inducted into the Rochester Athletic Club's Racquetball Hall of Fame on April 17.

You should know: An estimated 5 million people play racquetball worldwide, the large majority of those in the United States. There are about 25,000 USRA members (tournament players) in the U.S. Joe Sobek, an American, is credited with inventing the sport in 1940.

Jim Roth isn't too old to enjoy a well-earned trophy, and he isn't too proud to accept an honor when it's bestowed — even when he's not 100 percent sure he earned it.

The 63-year-old Rochester man already has a den full of trophies that he has accumulated over 26 years of competing in amateur racquetball tournaments, and now his peers want to acknowledge his commitment to their sport locally.

Roth will be inducted into the Rochester Racquetball Hall of Fame on April 17 at the Rochester Athletic Club, an honor that he sheepishly says is probably more for his years of indirect financial sponsorship of the local tournaments than it is an acknowledgment of his racquetball skills.

"It sure is a nice honor, but it's actually not that big of a deal," insisted Roth, who has been playing racquetball in Rochester since 1984. He is the only inductee into the hall of fame this year, and the 22nd person to be inducted since it began in 1989.

Roth will be retiring soon after a long career with Davies Printing of Rochester. In 1995 he persuaded the company to sign on as the primary sponsor of large regional tournaments that were drawn to the city, and the company has continued to support racquetball events here ever since.

"It's more about the sponsorship than my great playing ability," Roth said with a chuckle. "Every year the fees kept going up, and the money was needed to jumpstart the big tournaments."

The RAC, which has five racquetball courts, will typically host three to four large regional racquetball tournaments each year, drawing amateur players from throughout the upper midwest. Each tournament will draw up to 130 players.

While Roth downplays his own conquests on the racquetball court, the truth is he has had his share according to Wendy Miller, who is the racquet sports coordinator at the RAC.

"I think Jim is being a little modest," Miller said. "He has been a very good player for a long time."

Amateur players are divided into divisions based on ability, from Open (the best), to 'A' , 'B' and 'C'. Roth has typically played in the 'B' division and has qualified for eight state tournaments over the years, most recently in 2007. He placed third in the state at age 45, his best finish.

Two years later he placed second in his division in a national tournament for senior level players.

"I've got a place where my wife makes me keep them all," Roth said of his many trophies. "She doesn't really like dusting them."

Roth said his devotion to racquetball is more about staying in shape than winning.

"I'm a little competitive; I feel good when I have a good shot," said Roth, who still typically plays three times each week during the cold months. "But I don't have a fit if I lose.

Roth said his one regret is that racquetball doesn't seem as popular as it used to be, especially amonger the younger generation.

"There used to be a lot of 20-to-30-year-olds who played regularly at the club, but I guess they have all had families and children," Roth said. "Now it's just us old buggers, and that's big-time disappointing to me."

Miller said the actual numbers in the RAC's racquetball club has remained pretty constant at around 110 in her 11 years at the club, but it hasn't kept pace with the city's rising population.

Miller said that only about 15 percent of the regular racquetball players at the RAC are female, and she thinks that's a shame.

"I'd rather spend an hour on the racquetball court than 45 minutes on a treadmill, that's for sure," she said

article By: Donny Henn
The Post-Bulletin, Rochester MN
Posted by Mauro at 10:53 AM