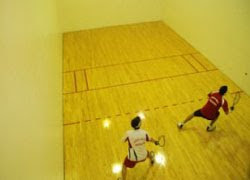 Costa Rica proved to be the strongest country in Central America when it comes to racquetball by winning gold medals in all divisions.

On the other hand, in the women's doubles, Costa Rica won the gold medal, the silver Honduras and Nicaragua completed the podium with the bronze medal. Same results occurred in the men's doubles with Costa Rica (gold), Honduras (silver), Nicaragua and Panama (bronze).

In mixed, the Costa Ricans maintained the supremacy winning gold, the silver medal went to Honduras and Panama took the bronze.

In the divisions for both male and female teams, Costa Rica won the gold, Honduras thesilver and Panama the bronze.
Posted by Mauro at 7:17 AM