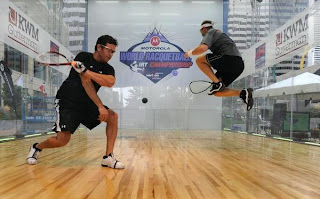 Along with the usual amateur divisions, the tournament will feature a pro division as a stop on the International Racquetball Tour circuit.

"We've had the tournament before, but we've never brought in the pros," club owner Danny Beaudry said. "We were only allowed to bring in two of the top-ranked pros on the tour, and we have two in the top eight."

Those two are familiar names to the Pueblo racquetball scene. Ben Croft, ranked 6th in the world, and Mitch Williams, ranked 8th, are former national champions from the Colorado State University-Pueblo club team.

"Because of our classification, we could only have two. Obviously those are the two we wanted to come," Beaudry said. "And they will bring in the competition. We have 20 pros playing this weekend."

The pro-division winner earns $1,000 — a nice prize in racquetball — and there are singles and doubles levels. Also, there is a talented pool of amateurs playing as well, Beaudry said.

Also in the tournament is Felipe Camacho, the No. 1-ranked player in Costa Rica and a student at CSU-Pueblo. Camacho recently played in the Pan-American Games in Honduras and the Central American Games in Panama.

Action begins at 5 p.m. on Friday. It runs all day Saturday and Sunday on the club's five courts. Beaudry said the top players and key matches will be scheduled for the challenge (or showcase) court and that the public is invited to watch any or all of the matches free of charge.
Posted by Mauro at 6:13 PM