News from Canada- B.C. gears itself up for re-birth of racquetball 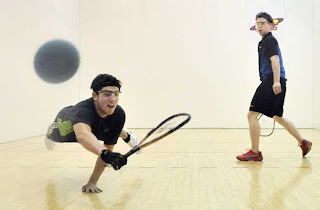 Pedro Castro dives and takes a shot off the back wall playing Kevin Caouette as the Canadian Racquetball Championships singles category got underway today, in Burnaby, B.C. on May 26, 2010. Young players Pedro Castro (white shoes) and Kevin Caouette played in the 'men's open', with Castro taking two straight games out of three, 15-4,15-4.

Ask most people about racquetball and one of the first images that comes to mind is a classic scene from Tom Hanks' breakout 1984 flick Splash.

A velour track suit-clad John Candy, a headband around his unruly mop of hair and a cigarette dangling from his mouth, lumbers after a few shots before panting that his "heart is beating like a rabbit" and slumps onto a cooler from which he's pulled a beer.

After a few seconds of rest, he stands up, hands Hanks the beer — "I'll serve, you hold the beer. That will be your handicap" — and is nailed in the forehead by the ball rebounding off the back wall.

It's a characterization that even devoted racquetball players can laugh at, particularly when the sport is compared to its 'blue-blood' cousin, squash.

"We're blue collar," says Cheryl McKeeman, president of the B.C. Racquetball Association. "I mean, I'm a college professor and we've got doctors and lawyers and dentists playing, but traditionally it's a blue-collar sport. We're the beer drinkers, not the white wine drinkers. I guess you could put it that way."

It's also a sport fighting to attract attention at the elite high-performance level and trying to reverse declining participation numbers, particularly in B.C. where one of the biggest challenges is simply keeping facilities open.


B.C. is hosting the Canadian championships this week at REVS Fitness Centre in Burnaby, but even with under-45 to under-70 divisions in addition to the men's and women's open competitions there were only 167 athletes registered. That's down from 400 the last time the nationals were held in Burnaby in 1998.

"The sport kind of reached it's hey-day 30 years ago," says McKeeman. "Courts sprung up like crazy all over the place. And then as facilities moved to a useage per square foot or cost per square foot [model], that became an issue for both racquetball and squash because [the courts require] two storeys. So you double the square footage and it's such a tough sell.

"And then we saw the whole transition to fitness and clubs moved in fitness equipment."

McKeeman said there are only about 80 racquetball courts in the province, a four-fold decrease from the 1980s.

When REVS was first built, there were 10 racquetball courts. Now, there are just five, with the others having been turned over to weight lifting equipment and a boxing club.


Despite the facility issues, McKeeman says the sport is starting to see a re-birth, largely because provincial associations are focussing efforts on junior development programs.


The sport, which has never had the significant benefit of Olympic schedule exposure, should get a huge lift, however, from the 2015 Pan Am Games being held in Toronto.

Racquetball, which stages bi-annual world championships, has been a full medal sport in the Pan Am Games since 1995 and Canada has been among the top three nations. Most of the country's top players come from Quebec and Ontario , but there is also a strong program in Saskatchewan, which is the home of Canada's top-ranked men's player Kris Odegaard.

One of those anxiously looking forward to 2015, however, is 18-year-old Pedro Castro of Brossard, Que. He's the reigning under-18 national champion and is competing in his third senior nationals this week. He easily beat another top Canadian junior, Kevin Caouette 15-4, 15-4 in an opening-round match Wednesday.

"Last year, I finished 13th and I was in a tie-breaker with [Quebecer] Vincent Gagnon, who was third last year . . . so my goal is to be in the quarter-finals," said the personable Grade 12 student who would eventually like to become a policeman.

"Today, Kevin play hard. He's an awesome player, never quits, but I think if I play well it was because I was more focused than him. He makes lot of mistakes and I take the shot."

Castro, who first started playing the game at 11 and who plays shortstop in baseball, showed incredible quickness and was fearless in diving for balls to keep rallies alive.

"I love the speed of the game. It's a fast game and I like to move quick. And to hit the ball hard. In some sports, like squash, you have to like push the ball. For me, it's not my type. I like to go hard at the ball."

He will compete in a final world juniors in Los Angeles in November, where his goal is to make the final, and the Pan Am team in 2015 is his long-term goal.

"I would like, and I will train hard, to be there on the team. It's a long time away, but I've got a good support with Rino, my coach. He's a very good coach and he train me hard."
Posted by Mauro at 7:13 PM