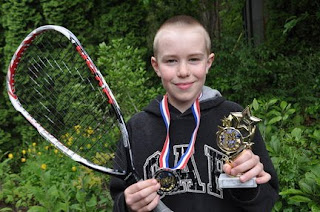 Daryl's past honors include first place in the 2009 mixed beginner doubles and two first-place finishes in the 2007 state championships.

Says Daryl about this year's win: "I was happy that I won. It's fun to play. I love racquetball. I don't care if I win or lose but it's fun to win."
Congratulations Daryl !!!
Posted by Mauro at 7:04 PM