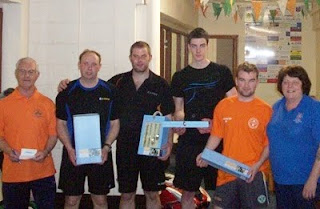 After being troubled by a knee injury for a greater part of the season, Noel O`Callaghan (Fermoy) bounced back to win the Mens Singles at the 29th Irish Open in Arklow. O`Callaghan defeated Adam Neary of Arklow in the final. Both players combined to win the Mens Doubles defeating Sean Keane and Jonn O`Keeney. Donna Ryder(Newport) kept up her consistent form by winning the Womens Singles defeating Katie Kenny (Castlebar)who was making her first appearance in a Womens Singles Final. Consolation however for Kenny when she partnered Majella Haverty to win the Womens Doubles.
Posted by Mauro at 7:32 AM