Next on European Racquetball Tour: French Open in Paris 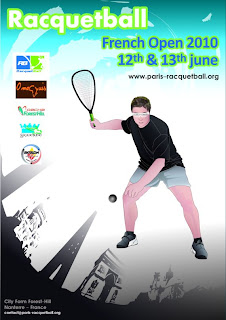 The last tournament of the European Racquetball Tour season 2009/2010 will be held in Paris this year. The French Open on 12th and 13th of June will once again attract players from all over Europe as well as from abroad. Players can sign in online by goining to the offical Franch Open 2010 website at http://www.paris-racquetball.org/en/racquetball-french-open-2010. The French Open will offer the great French hospitality: Fruits, cookies and water will be available on saturday morning and sunday morning for all players and for free. Hot meals and drinks can also be purchased at the bar of the club. And on top of this: For soccer fans, matches from the FIFA World Soccer Cup will be shown on the big screen television of the club throughout the weed-end. What else can you expect?

With the 2010 French Ope, the ERT season concludes on a high note. With 13 events this year, the ERT Tour has seen more venues, more players and more competition this year than ever before. There will be some changes to the ERT guidelines and statutes in the near future though to strenghten some forces and to make sure that our events remain to be attractive and competitve. Stay tuned for this.

Big thanks to our offical ball sponsor EKTELON. There has been only positive feedback from the players and the ERF/ERT is looking forward working with Ektelon in the years ahead.
Posted by Mauro at 6:09 PM