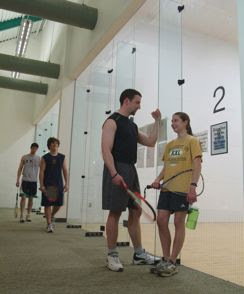 This doesn't include 30 more courts at other facilities at that time. Today, most of these facilities are extinct or the courts have been removed for other venues. What happened?

Bob Miller is the general manager of the BAC Fitness Center on Union Road. Twenty-five years ago he was district manager for Bally Matrix in Buffalo and Rochester.

"You have to realize that a racquetball court is 40 by 20 feet; a total of 800 square feet," Miller said. "At the most, four people can play at one time. We put 10 Nautilus machines in one of the courts and we can get 100 people involved in fitness in an hour, versus four in a racquetball game."

Miller stressed that the same players were always playing either in league play or for recreation. In the summer the game basically died due to many players playing tennis or golf.

"Younger players weren't in abundance," Miller said. "As soon as lacrosse and soccer came into play, the amount of younger players diminished even more.

"Twenty-five years ago when fitness really started to take off, racquetball really took a big hit. Members didn't have to book time for fitness as they did in racquetball and could work out pretty much whenever they wanted to."

Phil Primerano Jr. is one of the area's finest racquetball players and is general manager of JB's Tennis Shop. He said, "Personally, I feel that one of the main reasons racquetball is suffering is due to poor television coverage. If you watch some of the matches on television, the points are over quickly due to the powerful racquets and high bouncing racquetballs. This results in viewers losing interest. ... In tennis it is just the opposite. Lengthy points allow viewers to get into the matches and really enjoy the game."

Primerano also feels that the game isn't promoted as well as it should be at the local, state, and national level. For instance, not many racquetball players are even aware that there is a burgeoning pro tour with up to 15 tournaments a year. And, when it comes to knowing who the top players are, most racquetballers don't even have a clue.

Dan Daddario is president of the Western New York Racquetball Association. He estimates there are more than 500 racquetball players playing in local leagues or recreationally.

"Presently, we are looking for a site or an existing health club to partner with to put in four or five racquetball courts," Daddario said. "If we can get 100 members to sign up for $500 a year for five years that would give us a total of $250,000.

Each player would be an integral part of the club, not just a player. In essence it would be a great start for us. We could build from there by gradually adding cardio equipment and machines."

Daddario notes that WNY racquetball has a highly popular program at the University at Buffalo's North Campus for adults and youngsters. He stresses that it is the parents' responsibility to get their children to the clinics and practices.

"We have a hardcore group of players that still love the game and who do everything that they can to promote it," Daddario said. "Believe me, it hasn't been easy. However, we firmly believe that we have made some inroads with our clinics, leagues, promotions, and tournaments."

To find out more information about WNY racquetball, go to WNYRA.org

Although racquetball is struggling somewhat locally there are some bright spots nationally.

Terri Graham is in charge of player promotions for Wilson Racquetball.

"The year 2005 was a disaster for racquetball nationally," she said. "There were only about 3.6 million players nationally. Today, there are over 5.2 million players. Most of this growth has to be attributed to LA Fitness and Lifetime Fitness Clubs. They have been opening many racquetball and fitness clubs throughout the country, mostly in the Far West and Southwestern states.

"Each club that they open has five beautiful racquetball courts with full back wall glass. We are hoping that they will start to become a big factor back East. As for the state of racquetball today, it is the best it has been in the past 10 years. From a marketing standpoint, I can't be more thrilled."

Hopefully, they will be expanding into the Western New York area in the near future.

article By Charlie Garfinkel
Posted by Mauro at 7:58 PM