What happened to the guy in Jeans? 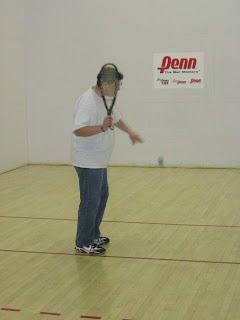 Who doesn't remember the guy with the white ektelon shirt, jeans, new balance running shoes and an old hat from UF? I remember when I played my first racquetball tournament in 2007 seeing a guy playing on jeans. He was playing on the B division. He looked like he just got out of class and just stopped by to play in the tournament. The interesting thing is that as the tournament progressed I kept seeing the guy still on jeans. Two things caught my attention. First that he kept winning all his matches and second he only had one outfit for the tournament. After a few matches and a day of tournament the word around was " Hey Joe how did you do? Well Kenny, I lost to the guy in Jeans" and Kenny would go " really? I thought that guy wasn't even playing". And a few minutes later you would hear the same. It turns out the guy with Jeans won the B's and at that time the B draw was gigantic. A few months later I saw the guy again in a tournament at UF. The outfit did not change and I had to play doubles against him. I remember people trying to kick him out of the court before the match, telling him that he had to leave because a match was starting at that court. He would turn around and say" yes I know I am playing". Turns out the guy was actually a pretty good racquetball player and that would explain his victory on the B's in Orlando.

Should we start a new trend ? why does he play in Jeans? Does racquetball have a dress code for tournaments?
Posted by Mauro at 7:28 AM