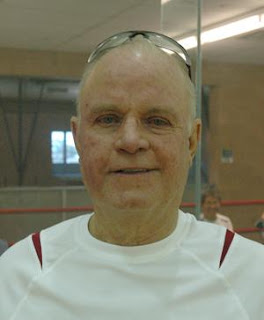 Carl Thompson will be the junior racquetball instructor which meets for two sessions, beginning June 8 to 24 and July 6 to 22.

For the fourth consecutive year, the Foothills 360 recreation program is in high gear at the Foothills Recreation and Aquatics Center, 5600 W. Union Hills Drive.

Foothills' senior Recreation Coordinator Jackie Anderson said the 360 program, for boys and girls 5 to 11, offers something for every child.

“It's a very similar program (to past years),” Anderson said. “We're working on bringing in guest speakers at least once a week, which the kids always look forward to.”

Anderson said parents appreciate the program as more than a recreational outlet for their children.

“They really want the kids to socialize and be active,” she said. “We do physical activities and we keep the kids busy all day long. There's a little bit of something for everyone.”

Anderson said there is a new wrinkle parents and children will enjoy.

“We added a week in the last week of May and the first week of August into our schedule,” she said. “Parents were requesting this, and before we started Memorial Day weekend and ended at the end of July.”

Also at Foothills, which Anderson oversees, is the Junior Racquetball League for kids 10 to 15. The three-year league is taught by Carl Thompson, and is all about rules and skills for fun, safe play.

“There's instruction at the beginning on the racquetball court,” she said. “For many kids, it's a new sport and it's a great physical activity. It's like riding a bike; once you learn it, it's with you. We provide all the equipment, so just dress comfortably and be ready to work out.”

Sessions are two hours (11 a.m. to 1 p.m.) Tuesday and Thursday with the first session from June 8 to 24 and the second session running from July 6 to 22.

Players are paired with others having similar abilities with Glendale residents paying $24 and non-residents $30.

Lastly, Anderson also oversees the Fitness for Teens program for 13- to 17-year-olds. The program runs 10 a.m. to noon June 7 to 10 Monday through Thursday and for the next five weeks.

There is a Fitness for teens program July 5 to 8. The sessions are taught by certified physical trainer and certified nutritionist, Eileen Sammer.

“We're trying to teach these kids how to develop their own workout plan so they stay healthy,” Anderson said. “Once they get here, they get a wide variety of options and hopefully they'll find something they like.”