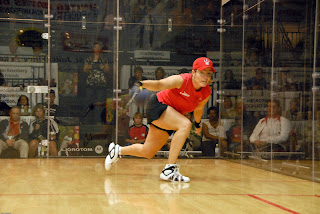 Cheryl Gudinas (born May 11, 1967) is an American racquetball player. She has been one of the dominant players from the 1990s into the 2000s.
Gudinas has won two US Open Racquetball Championships in 2002 and 2004.[1] She has been a top 4 player on the women's pro tour since the 1993-94 season, including four seasons as the #1 player from 2000-2004. Gudinas was the #3 ranked player on the Women's Professional Racquetball Organization tour at the end of the 2008-09 season.
Gudinas won three consecutive International Racquetball Federation (IRF) World Championships in 2000, 2002 and 2004. She defeated Canadians Christie Van Hees and Jennifer Saunders in 2000 and 2002, respectively, and Chilean Angela Grisar in 2004.

Gudinas won the Pan American Championships (formerly the Tournament of the Americas) in 1994 (against American Laura Fenton), 1997 (Michelle Gould, USA), 2001 (Josée Grand'Maître, Canada) and 2009 (Carole Loma, Bolivia).
Gudinas has also won two gold medals at the Pan American Games. In 1999 she defeated Canadian Christie Van Hees in the final, and beat fellow American Laura Fenton in the 2003 final.
Gudinas won 5 consecutive US Nationals Championships in singles from 1999 to 2003, and also won in 2005 and 2008. Her seven titles are second on the all time list behind only Michelle Gould with eight.

Gudinas teamed up with Gould in 1995 and 1996 to win two of her three US National Doubles titles. Her other title was in 2001 with Kim Russell

Cheryl will be playing Women's Sinlges at the 2010 World Championships in Korea. Cheryl placed 1st at the 2010 National Singles Championships to earn a this spot on the team.
Gudinas was inducted into the ISRA Hall of Fame. please send Cheryl a note to congratulate her on this recognition at: unifiedfit@aol.com.
Posted by Mauro at 3:11 PM