Claudine started on the right foot in Pro Racquetball Tour 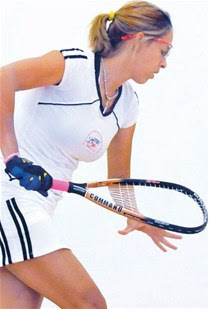 The Dominican Claudine Garcia was optimistic for her participation in the second pro stop of the Pro Racquetball Tour which began Wednesday and ends on 20th of this month in Cali , Colombia.

The triple silver medalist in the last Central American and Caribbean Games in Mayaguez , Puerto Rico , said that she will be competing in the professional category , who will be the top 10 competitors in the world and racquetball area of South America. Also playing in the Open as a way to continue its program of preparation.

"My goal at the Pro Tour is seeking a better ranking for the U.S. Open and also serves as a training and warmup to prepare for the 2011 Pan American Games , " Garcia said prior to his departure to Colombia.

After being absent from the Pro Racquetball Tour since 2002 , athlete quisqueyana returns to competition for the second time this year. Last August, from 27 to 29 , Claudine attended the first pro stop that took place in Dallas , Texas, where she earned two victories and one defeat.

Today, Garcia, who started in 25th position at the first stop , is in the place 32 in the World Ranking and intention , as stated , is to go slowly gaining ground .

"No competing on the Pro Tour since 2002, but since I started playing more intensely since January and I'm feeling more confident and my level has been rising slowly , "said Garcia, who added: " At this pro stop in Cali will not be the same players who were in Texas , now they have a lot of participation of athletes from South America, mainly due to the proximity of the venue. "

"Claudine Garcia is our most complete player and I think that little by little, as she takes part in these events, she will continue to rise in each of their events , climbing positions in the Pro Tour , "said Rafael Fernandez.
good luck Claudine and play hard.
Posted by Mauro at 12:29 PM