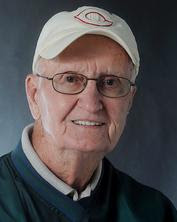 A 90-year-old man playing shuffle board is understandably an accomplishment.
One who is still golfing or bowling is very much a noteworthy feat.
But to be playing racquetball at the age of 90 like Springfielder Gene Richardson. Well, that’s special.
He just this past week entered his 10th decade on this earth. And even he sometimes finds it hard to fathom he can still play.
“It’s hard to believe, really,” he admitted. But playing racquetball three times a week at the Springfield Family Y and exercising daily when he doesn’t has kept the spring in his step.
“It seems like I’m having problems finding people to play,” he said with a laugh. But it wasn’t with conceit. But lack of players for fear of being embarrassed by an old man is a fact that he’s had to deal with.
Age is relative for a man as active as “Rich,” as most friends know him.
“I played tennis for about 30 years and then the sun started getting to me and I had skin cancer,” said Richardson. “I would like to think I’ve been playing racquetball for around 30 years, too.”
The reason he still plays is simple.
“The exercise,” he said. “Especially when you get up in my age, you can’t just sit down and wait. Plus it’s a fun game and kind of addicting.
“The days I don’t play racquetball, I’ll do three miles on the treadmill,” he continued. “I’ll do a mile, mile and a half in the morning, then another mile or mile and a half.”
He does so because he likes the results.
“I’ve never had a problem with eating or gaining weight,” he said. “I’ve been 150 pounds my whole life, maybe 155 pounds at the most.”
Richardson stays realistic, though.
“I’m sure I have slowed down some from where I was 30 years ago, but I don’t have trouble running,” he said. “There’s a lot of guys that I can’t beat.”
And some who he still can.
“I’m competitive,” he said. “I don’t like to get beat.”
But not at the expense of relationships.
“I just can’t imagine all the friends I’ve gained playing racquetball,” he said.
The physical and social benefits have paid off handsomely.
“I’m sure that’s what keeps me going,” he said. “I didn’t start out making it that long, but I’m sure that has helped.”
He does have one vice, though: chocolate candy. But as active as he is, that sweet tooth never seems to cause a problem.
“He’s a good inspiration for folks around here,” said Springfield Y acting director Joe Moorman. “Hey, you’ve got to keep moving. If you retire and sit around and watch TV and eat munchies all the time, you’re not going to live very long.
“It’s the key to longevity: Keep moving and keep living.”
Posted by Mauro at 8:23 PM