Don't Argue any calls with this Guy 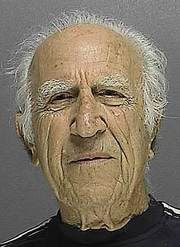 An 89-year-old retired educator and school principal forgot he had a loaded gun in his gym bag when he walked into the Port Orange YMCA carrying it, he said Friday.

"I was a little concerned about her getting it," Sganga said Friday, explaining why he was toting the gun in his bag. "I said, 'Where the hell do I hide that thing?' So I put the gun in the racquetball bag and covered it with a towel and shirts."

Then, he said, he forgot all about it.

Sganga, who lives in New Smyrna Beach but drives to play racquetball in Port Orange three days a week, was worried about an argument he and his wife, May Sganga, had earlier this week when he hid the gun. She was "extremely angry," he said.

Officers interrupted his racquetball match Thursday morning to inspect the gym bag. After they found the gun, Sganga was charged with carrying a concealed weapon, a felony, and taken to the Volusia County Branch Jail. He posted $1,000 bail Thursday night.

Police said the gun was a silver .38-special Taurus revolver with four live rounds and one blank, which Sganga said he usually kept in a dresser drawer to protect his home.

May Sganga, 59, was taken to a victim's advocate's office and then to a shelter, according to the police report.

On Friday, however, Frank Sganga, said his truck was missing after his wife of seven months loaded all her belongings into it and disappeared. He was considering reporting the truck stolen.

Sganga's last visit to the jail was in 2007 when he and then-wife Jeanmarie Sganga were charged with aggravated battery after police found them both injured at his house on Sunset Drive. The pair, police said, were arguing over credit-card statements when Frank began smashing vases with his racquet and a wrestling match ensued.

He went to anger management classes as a condition of a deferred prosecution agreement in that case, according to court records. His wife's charges were dropped.

Thursday's arrest embarrassed the longtime educator and writer -- "they cuffed me and carried me through the damn lobby, and it was embarrassing as hell" -- but he said he was glad not to spend the night in the jail as he did in 2007.

"I understood where they were coming from, because people do blow away other people," he said of the arrest. "It was no place for a gun to be, I know that. It was inadvertent. I just didn't know it was there.

"I'll go before a judge, and I'll just explain the story like I explained it to you, and hope he understands that it was a pure, inadvertent ... I shouldn't have had the gun in the bag. I won't mind community service -- I just don't want to be fined and jailed."
Posted by Mauro at 7:05 PM