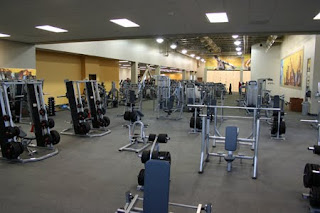 In south Florida doesn't seem to be case. From Kendall to wellington we have a 67 mile stretch south to north on the coast and about another 10 miles east west. On that strip we have just in La Fitness clubs about 72 courts which gives us more than one court per mile. On that same strip we have several private courts, we have courts at the 24 Hour fitness centers, some courts at the YMCA,UM, FIU and JCC. If we make a safe assumption on the remaining courts besides the dominating LA fitness we could assume maybe another 20 on the strip. The total so far would be 92 courts in our 67 mile by 10 mile strip. Now keep in mind that I am only talking about indoor courts. If we add outdoor to this equation the number can easily double since on that strip we have several locations with outdoor courts. Just show up to one of the outdoor events down here and you will see how many people are there.

Now one may argue that the courts are just taking space. Well I can safely say that I have been to most of these locations and different times and I can tell you that during pick hours at the gym all the courts are always full including the challenge court. Of course if you go to the gym in a sunny weekend day in Florida at 1 pm you might not find anyone playing but you won't find anyone at the basketball either.

My point is that I don't see the sport dying where I am. I keep hearing the same thing over and over but it just doesn't add up. It might not be what was 20 years ago but is definitely not dying.

Now in tournaments the numbers may not be so great. In tournaments is very rare to see a new face but that goes back to the fact that we have 5 million players nation wide and only 14,000 USRA members. That is just a horrible percentage and does not help the sport. We do our best to get more people involved but the fact that the places where our sport is present is treated as a recreational sport and not also as a competition sport, will not attract new comers to the tournaments. We can't host tournaments at La Fitness and there is no Pros teaching lessons in a daily basis. On the place that we have the great majority of courts and people we don't have a racquetball program. The only program are the leagues which maybe out of 20 new players, you might have 2 or 3 that might want to try tournaments. Not to mention that in La Fitness, kids can't play at all.
I believe that the problem is not the fact that the sport is dying or that we need to get more people to play. I believe we have to change the culture of the sport inside La Fitness. Weather we like it or not La Fitness is the market for racquetball. Their facilities have a monster number of members and several people using the courts. There is no better exposure to racquetball right now than the courts at La Fitness. Thousands of people coming in and out everyday, watching the rallies during their work out time outs. Obviously not a easy task since La Fitness belongs to a 14 billion dollar private equity group that only cares about the numbers. To convince someone inside the corporation to implement a racquetball program, including lessons, junior team and competition will be very difficult. I believe that is where racquetball struggles. If we can ever make it over that hump, things will become extremely different very fast. Places to play and the people who play are there but we just can't connect the dots to make it work.

In the mean time we continue to do what we can to advertise the sport, instruct people and take information anywhere we can. Once someone tries, the sport will sell itself.
Posted by Mauro at 8:16 PM