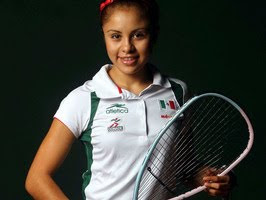 The mexican Paola Longoria was proclaimed the runner up at the world professional championship of Racquetbol, disputed in Cali, Colombia, after losing in four sets to the american Rhonda Rajsich.

Longoria began the final match of the Colombian tournament with the right foot after winning the first game, however failed to keep pace, and ended up losing against the American.

This is Paola Longoria's second defeat at the hands of the American, who also eliminated the Mexican in the semi-finals of the world championships, held in Seoul, South Korea.

The next chalenge for Paola, current champion of the Texas Open, is the US open, in Minnesota from 20 to 24 October.

It should be noted that the Professional World Championship of Racquetbol, corresponded to the second WPRO event of the season, and the first Grand Slam of the season.

Congratulations to Paola and Rhonda for making to the finals.
Posted by Mauro at 3:49 PM