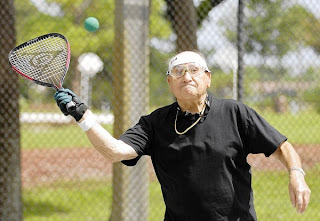 At first glance, Victor Asher doesn't look his age. His son, Larry, says the Boynton Beach resident gets this response all the time from people inside the Green Cay Village development.
But what amazes everyone about Asher is what he's still able to do, whether it's playing racquetball, going bowling, working out in the gym or climbing 16 steps in his townhouse.
He even can still drive at night on all the major highways.
Nicknamed "Vic Ash," Asher's staying strong and active at 98 years young. He was born in June, 1912.
"I've played tennis and golf, but I love racquetball the best," said Asher. "It's a very nice game, especially with partners. It's too much running around for me in singles."
Posted by Mauro at 8:29 PM