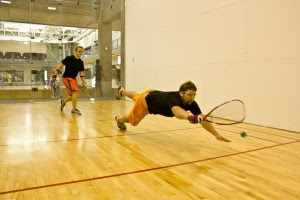 If you’ve been to the Student Recreation Center here on campus then you’ve probably seen those sweaty beasts in their glass cages down at the end of the basketball courts. The ones with the goofy safety glasses and wear more arm bands than Allen Iverson. These gentlemen (and ladies) are racquetball players, and if you think their sport is lame or for old professors you just might want to give it a try.

When I saw racquetball on the club sports list I was immediately intrigued. I don’t know of a sport that I’ve actually been around more, yet I know so little about. My first step was to find someone with some background and knowledge for the sport who would be willing to fill me in and give me some pointers. So I decided to head for the source, racquetball club president and founder Sean Campbell.

After sitting down with Sean I learned that his passion for racquetball came by accident.

“I didn’t know what it was, I didn’t even know what to call it,” Campbell recalled after seeing the courts down at the Rec. “After looking through all the KIN-ACT classes, the only opening left was for racquetball.”

And so his story began. He fell in love with the game and was constantly looking for new and better competition. This is what sparked his idea to get involved and start up a new club.

The last attempt to start up a racquetball club back in 2001 fell flat on its face with only four members joining. The club’s resurgence is mainly attributed to Sean’s open door policy, “We want to get a network of players that can get together, practice, and have fun, no matter their skill level.”

“I want to bring racquetball back, it’s not as popular as it once was,” Campbell said.

This dip in popularity can be traced back to the changes (mainly the increase in racquet size) that occurred with the game in the late 1990s.

“When they raised the speed of the game the eye injuries increased, and the popularity went down,” said Joe Fuson, club coach and racquetball enthusiast. But with the advances in light-weight, high impact eye protection, many old injuries are being avoided.

“We had two world champions for 10 years running out of Spokane and Boise. Boise used to be a Mecca of racquetball in the ’90s,” Fuson said.

I challenged Campbell and club secretary Jesse Beumeler to a friendly game (bad idea on my part). After going over a few rules and guidelines, it was time for the moment of truth. The first thing that I noticed when stepping into court is that this is a very loud sport. The next thing I discovered after getting hit in the back of the head with the ball, was that the game tends to move rather fast. We played a rotating three man game to 21 points, and I learned why you shouldn’t challenge the club president and secretary.

Thanks for taking it easy guys
Posted by Mauro at 7:48 PM