Hit the ball to yourself in racquetball 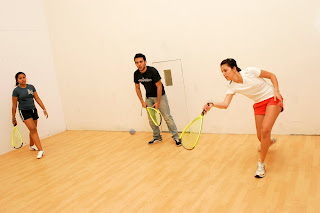 Downers Grove, IL — DO IT
Racquetball is one of the few sports where a second person isn’t needed with the wall as your opponent.

Play to beat others or play for fun and exercise by one’s self by hitting the wall in a game of racquetball. The game has the motions of tennis, between the running around and forceful swings, but another player isn’t required. They are required if you’re playing a game in a league.

Joann Able, customer service manager for Sunset Racquetball and Fitness Center in Geneva, says a racquetball game can be played with two or four players and that scoring is based on the best of three games, each game being played to 15 points.

“Wallyball is basically volleyball played on a racquetball court,” Able says. “The difference being that the court walls can be used (in the game).”

WHAT YOU NEED
As probably realized, a person needs a racquet and ball to play racquetball. Both items can be rented at the Sunset Racquetball and Fitness Center. Able says goggles are recommended for safety, but they’re not required. Goggles can also be rented at the site.

For wallyball, a wallyball net and ball is needed, she says.

WHERE
Reservations should be made in advance to play on Sunset Racquetball’s courts. To reserve a court time, call (630) 232-7867.