Playing at 60? On the pro tour? Seriously? 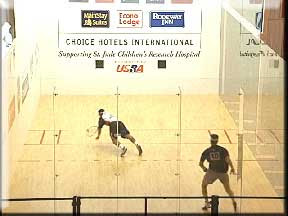 Recently, Ruben Gonzalez, racquetball legend and former #1 men's pro player, signed an agreement with Ektelon that will see him play on the International Racquetball Tour (IRT) the next two seasons with the stated goal of being in the top 10 when he turns 60 on July 22, 2012. Yes, 60. Sixty. Six decades on the planet. The collective response to this around The Racquetball Blog office has been a collective "huh?" We don't wonder why Ektelon is doing this, as it's a great promotional thing. Gonzalez is an esteemed member of the racquetball community, so it's completely understandable that Ektelon would like to align itself with him. Indeed, Gonzalez is so esteemed that this move has not been met with out and out derision. But a sixty year old thinking he can be a top 10 pro racquetball player? Who's kidding who here? Racquetball is a speed and power game requiring significant flexibility, and all of those qualities decrease significantly with age. They decrease even if one remains active, as Gonzalez has. He remains a very good player, and has a streak of making at least the Round of 16 once (or more) for 28 consecutive IRT seasons, though he has yet to do so this season. But making the 16s once a season is much different from being in the top 10 at the end of a season. However, consider for a moment that Gonzalez is able to do that: be a top 10 player at 60. How would that reflect on the other IRT players? Short answer: badly. If a 60 year old can be a top 10 IRT player then it begs the question as to how good the IRT field is. And if a 60 can be a top 10 IRT player it doesn't put anyone winning IRT events in a good light, so Kane Waselenchuk, the current IRT #1, should be rooting against Gonzalez because if Gonzalez is successful it suggests that all of Waselenchuk's wins are partly due to a lower quality pool of IRT players compared with past years. Perhaps Gonzalez's plan is to play all the events, make the 16s at each, and hope that gets him enough points to be in the top 10. But he'd have to pass players currently on the edge of the top 10 - such as Charlie Pratt and Anthony Herrera, who have both won matches against higher ranked competition this season. Could Gonzalez beat anyone in the top 8? Of course, the game is played on the court not on paper or in the imagination, but we can't imagine Gonzalez defeating anyone currently in the top 8. Gonzalez's top 10 goal is good for him and Ektelon, and from a marketing perspective maybe even the IRT and racquetball in general.
Posted by Mauro at 4:59 PM