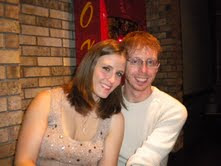 Dual careers can be tough on a marriage, unless the couple is Andy and Tracy Hawthorne and the profession involves racquetball. “We both love the sport. He’s playing the tour full time. While my friends say that’s hard, I understand the game is his job. A lot of relationships would really struggle, but it works for us.” When we spoke the couple had just returned from Michigan, where she and Andy drove eleven college students to compete in a regional tournament. “It’s really special for me to be involved at that level because that’s where I started to play. They have the same passion getting into to it as I did when I started. It’s really awesome.” Photo by Mike Augustin The full time accountant is finishing a masters in preparation to sitting for the CPA exam, after which she plans to have more time to actively pursue her goal of growing the game. Perhaps she downplays her day job because working with college students is really special for the couple; that’s the time of life when she started to play and how she and Andy met. Andy saw her around the courts and, seeing potential inviting her to play with the group. Tracy recalls their meeting slightly differently. “At first I wasn’t that good, just in it for the parties. But, after getting into the game and learning how cool the people were, I fell in love with the sport. I love everything thing about it.” Andy would disagree – but only with the part about her not being that good. “We’d been friends for a very long time. After three or four years, we both decided our relationship was more like boyfriend and girlfriend and made it official.” These days they both play at Baldwin-Wallace College, where Andy practices, regularly joining Tracy as she works with the college students and prepares to compete at Intercollegiates. The only family member who doesn’t appreciate their love of racquetball might be Mia, their cat, who sits on their bags in protest whenever they get ready to travel. Tracy appreciates the sacrifice, since this racquetball pair enjoys working with others as much as playing. “It keeps me feeling young again
Posted by Mauro at 4:55 PM