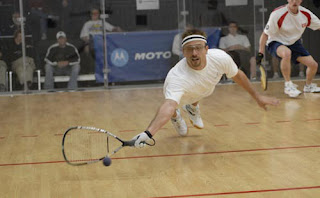 Jason Mannino seems like a natural fit to write about the sport of racquetball. After all, the former 4S Ranch resident has been around the sport for nearly all of his life.


Jason Mannino, a former top-ranked professional racquetball player who used to live in 4S Ranch, has written an instructional book about the sport. (Photo Provided by Mike Boatman)
The former professional player retired last year at the age of 35 after playing in the sport’s top tier for nearly 15 years.

He was the top-ranked player in the world during three seasons, and was the International Racquetball Tour’s (IRT) Player of the year in 2003, when he finished number one.

Mannino gave up playing the sport professionally last May and is now the IRT’s president, managing the organization’s day-to-day operations and building awareness about the sport that he started playing at the age of two.

Mannino was ranked fourth in the world when he decided to retire.

“The body was starting to show normal signs of breaking down,” Mannino said. “I was getting muscle tears that didn’t heal for two months, the types of thing that used to take a week to heal when I was younger … I saw the writing on the wall.”

In addition to his work with the IRT, Mannino is working on his coaching.

For years he’s traveled the country, holding racquetball weekend camps with Fran Davis, a Hall of Famer in the sport who coached the U.S. National team for eight years.

Last month, Davis and Mannino released “Championship Racquetball,” a book that covers drills, tactics and competition advice for intermediate to advanced players of the sport.

Mannino said that the book can also be useful for athletes in other sports as well.

It includes sections on health and training, conditioning, fitness and core training, as well as tips about the mental side of the game and “psyching out” one’s opponents.

“It teaches you how to prepare for the emotional roller coaster of competition,” he added.

Mannino said he was self-taught. Though he started in the sport early , it wasn’t until 1993 that he “became a true student of the game.”

That’s after he was in a bad accident in New York after his car crashed into a telephone pole and was struck by another car, igniting the gas tank. Mannino broke his back and pelvis and was able to pick up the racquet a year later, even though he was told he might never be able to walk again.

Those notes later informed the book.

“We used all of the things I learned in my 30 years plus and (Davis’) 30-plus years of playing and teaching the sport,” he said.

For more information about the book, go to www.Human
Kinetics.com. For more about the sport of racquetball, visit www. IRT-tour.com.
Posted by Mauro at 7:41 PM