Racquetball could come to St. Robert 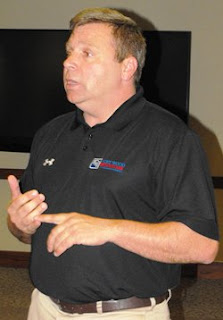 Rick Morris explains his proposal for a public racquetball court in the St. Robert city park.
SAINT ROBERT, Mo. (April 12, 2011) — Racquetball could join baseball, softball, rollerskating, swimming, and other outdoor activities if the St. Robert Park Board approves a proposal presented Monday evening by Richard Gower and Rick Morris to build a racquetball court in the city park.
“One thing that this community doesn’t have is a racquetball court. The great thing about this is it really provides an opportunity for everybody, especially the youth, to come in and really learn the sport of racquetball at no cost because it is part of the community park,” Morris said.

Morris told board members that the cost of renting an indoor racquetball court can be significant, but playing outside is a better workout and brings “a different dynamic” to the game. Having a racquetball court could draw people from other regions to St. Robert, he said, noting that both the state and national racquetball associations are interested.

Gower said the president and vice president of the Missouri Racquetball Association are willing to come to St. Robert and give clinics. He showed pictures of a racquetball court at Afton High School in St. Louis where the local group of racquetball players travel to play on Saturday and Sunday.

Park Committee Chairman Gene Newkirk asked if the proposed racquetball court would have a roof; Morris said no. The proposed structure would be three walls, 20 feet tall, but not load-bearing. Walls are usually 12 inches thick made of poured concrete, he said.

Newkirk said he liked the concept.

“We’re always looking for things to put in our park,” Newkirk said.

“It’s really a win-win for the community,” Morris said.

“How are these managed, who’s in charge of it? Are people signing up?” asked Alderman Larry Jackson. “It’s out in the open for free, but if a whole bunch of teams show up, is there a list or something?”

Morris said if an actual tournament were being played, the association running the tournament would reserve space in advance.

Park committee member Adrienne Echelberry asked where the court would be located; Morris suggested somewhere in the park near the aquatic center currently under construction or the already-existing skate park.

Park committee member Kevin Hillman came to the meeting after most of the racquetball discussion was finished and asked for details.

“Are they going to pay for it?” Hillman asked. “Let me tell you, Rick Morris beat me like a little kid one time in racquetball and I thought I was fairly good player. I stopped playing after that.”

“Maybe they can talk to Ehrhardt or something,” Newkirk said.

That’s a reference to Ehrhardt Properties, the owner of most of the hotels on St. Robert Boulevard as well as the Liberty Lodge. Morris serves as the operations manager for that company.

“You know, a 20-foot wall is great advertising space should people want to help pay for it,” Echelberry said, noting that ads probably need to be on the outside walls, not the primary hitting wall for the racquetball court.
Posted by Mauro at 8:01 PM