Are You Ready To Get Fit? 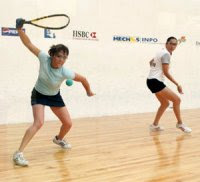 One of the best aspects of racquetball is that it is the perfect combination of enjoyment and exercise. Racquetball provides a terrific workout by helping to increase your stamina, improve your muscle tone, lower your level of body fat, and burn around seven hundred calories from your body. At the present time, racquetball has evolved into being listed among the most strenuous forms of cardiovascular workouts that are available. Joe Sobek, a former tennis and squash teacher, invented racquetball in 1950, and today racquetball is extremely popular in the US.

Within all weather conditions, racquetball is a sport that may be enjoyed no matter what. Racquetball is a wonderful exercise, because it requires extremely good hand to eye coordination and perfect knowledge of spin techniques and angles. Racquetball is a really fast game that is played with a rubber hollow ball and racquets within an outdoor and indoor court.

Racquetball requires two teams of either one or two players on each team, who then will hit the ball against one of the four walls or the ceilings of the enclosed court with short racquets made out of steel, wood, or fiberglass, and then strung with nylon which features a wrist wrap. The standard form of a racquetball court is enclosed within a rectangular area, around forty ft long, twenty ft wide, and twenty ft high. A short red line marks the racquetball court.

The rules associated with racquetball require that each of the players have to start the game off by standing within the zone or serve box. The shots have to hit the very front wall before they hit the ground in order to keep playing. Before touching the back wall, the ball should hit the floor, during the serve. The receiving team should stand inside of the zone for receiving during each and every serve. The server has to bounce the ball first on the inside of the service zone and then strike it with their racquet.

Overall, players of any age may begin playing racquetball once they have learned all of the basic rules associated with the game. The beginners may choose to play a form of racquetball known as singles games but the doubles games aren't for the inexperienced or novice player, because they require a lot of experience. In general however, racquetball is an enjoyable and fun game for everyone.
Posted by Mauro at 5:17 AM