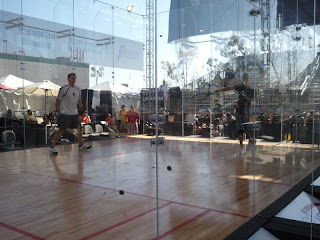 Both players flew inside the four glass walls, with Ben Croft taking the first game of the match against Andy Hawthorne, 11-1. Game two proved closer with long rallies that sent each opponent scrambling chasing the ProPenn and points with Ben racking up winners to stretch his 8-6 lead to a finish it 11-6. Both players kept game three close, with the crowd wincing as the players threw themselves to the floor, squeaking against the hardwood trying it up at 6-6. Hawthorne was ahead 8-6 when the players took a timeout and Croft quickly served his way to tie it back up 8-8 and then pulled ahead sending it to the ceiling until Croft took the offensive, killing the ball which Hawthorne just missed hitting back. They kept it close to the end, exchanging turns in the serve box with Ben up 11-10. Back and forth, on the floor and popping back up, Croft won the game and the match 13-11.

Rocky Carson donned his outdoor eyeguards before stepping onto the Clear Court for his match against Shane Vanderson, the second quarterfinal of the day. He took control in the first, with Shane earning 2 points to Rocky's 11 by the end. In game two Shane came out with new fire, keeping it close, but couldn't hold off the #2 player who finished with another win in game two with a score of 11-8. The two battled back and forth in game three, exchanging points and rallies, tying it up at 4-4 before Carson pulled ahead 6-4 and the players took a timeout, coming back to tie it up 6-6. Vanderson put one more point on the board before Rocky finished the match with a score of 11-7 in the third.

Tony Carson came out firing and focused, taking the first game 11-3. Crowler, down 10-8 in the 2nd, came back to win 12-10 with both playings making great serves and forcing long rallies. Point for point, the players kept the score close…4-4…5-5…until Carson took the biggest lead of the game at 9-6 and Crowther took a time out. Back on the court, the players continued to exchange rallies - and points until Crowther closed out game 3 11-9. Crowther ran up the score to 8-3 when Tony earned a trip back to the serve box and took a timeout. A point and an ace later, Tony returned to the back of the box when Crowther send a soft reverse pinch into the corner from 38'. Continuing to exchange points and rallies, Tony's sliding dive sent the ball to the front wall, bringing the score to 10-10. Crowther didn't let up, taking the game 12-10.

Round of 16's Results

Ever risked a sunburn watching indoor racquetball? A couple of upsets played out under the sun as the 12 seed Tony Carson defeated #5 Jose Rojas and upstart #25 Taylor Knoth took out #9 Anthony Herrera in the Round of 16's under the California sunshine at the inaugural Ektelon Nationals presented by Penn. If you're not here live, skip the sunscreen and join the 20,000 people watching the IRT Network online. Read more for the Round of 16's results.