Jim Winterton's How to Watch the Pros 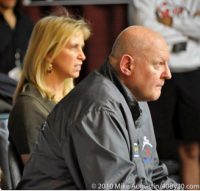 Hall of Fame coach Jim Winterton shares more of the tips he's learned from playing, watching, and coaching racquetball over the last 35 years in this second of a two-part article. Read on learn more of what to watch when you tune in to the professional championships at Ektelon Nationals presented by Penn, starting May 25 and broadcast live on the IRT Network.

We all love the match point, game point, and other crucial rallies. Often the pressure point is not one of those. It will occur in the 7-1 or similar lead. The player in the lead takes a rally off. This allows the player who is down back in the game. The four point runs are often preceded by the poor effort of the server who was up 7-1 or a similar margin.

The ha-ha factor is what I call the mental approach of the athletes before a match. The players know each other and even each other’s families. So when warming up each player is loose and relaxed. How can they be so relaxed? They are not, but the professionals have learned to loosen up so they can be more effective in their levels of play. “Fake it to make it”, is the mantra of professional racquetball.

This is one of the fun aspects of watching a pro match. A server may attack a backhand by moving over to the backhand side of the court, in the middle or more toward the forehand side. The server is using angles to find the "hole" in their opponent's serve return. This is the fun part of racquetball. Watch and see which of these heights the server is attacking; low-feet to knees, medium-knees to chest-high-above the chest.

Drive serves are used more now by the men because they have two serves, while the women have one serve. This leads to different strategies. The drive serve is used more sparingly with the women due to faulting more often. The men will mostly hit drive serves on the first serve and often on the second serve as well. The problem with the drive serve is it is all or nothing. If the player on defense can return an offensive return they will catch the server out of position. It is impossible to hit a drive serve and be able to get into center court position. The best a player can hope for is to get behind the short line by two feet. The returner will attack the drive serve as much as possible. On lob returns, the receiver is looking to cut off as many serves as they can for the same reason. The server will be out of position.

This one is fun also. Notice how some players play better when the crowd is on their side. These players tend to feed off a home crowd and play to that group by smiling and doing the “nicey nice” thing. Other athletes love the “bad to the bone” approach. They play better when the crowd is against them. There are a few who do not even notice the crowd; but only a few!!! That is why it is so much fun to get into the match!!

We all love a close match. They are exciting for sure, but please acknowledge that great play does not always translate to a great match for fans. To put it another way; the term “great rally” means players missed rally ending shot opportunities! Give the players their due. Look for how low the shots are and accurate, rather than close scoring theatrics. 14. Young guns vs the old vets-there are a number of great young players coming up to the pro ranks on the women's and men's tours. Look for these players. Watch how the oldsters attempt to control the overcharged phenoms they are playing. Usually the strategies the veterans employ to keep the youngsters at bay, are the same we can use in our challenge court battles at our home club!

One last thing you should know about the women and men who play this game professionally: They love the game as much as we do, maybe more. Do not be afraid to introduce yourself, tell them what you admire about their game, or ask questions. But always do this after matches, not before. Just before a match the athlete is focused on playing and I use the analogy of going into someone’s work place just before an important meeting and wanting to shoot the breeze. Probably not a good time for us to talk at work, and the pros are no different. They are going to work! After the match they are off work so that is the time to approach them.

Jim Winterton coaches the number one male and female pros, Kane Waselenchuk and Rhonda Rajsich, and has worked with them for over eight years. He also coaches other athletes, such as three of the top four collegiate males in 2011, and four athletes on the WPRO besides Rhonda. Check out www.coachrball.com for more information about Jim's athletes and his online coaching programs. He is excited to be working with the USA Racquetball Instructors Program developing teaching and coaching. Be sure to say hi to Jim this week as he loves to meet folks and talk racquetball.
Posted by Mauro at 6:12 PM