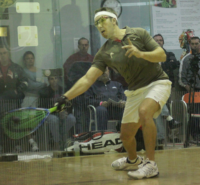 Fullerton, Calif. – May 23, 2011 – Team HEAD/Penn’s Jack Huczek today officially announced his retirement from the sport of racquetball. He leaves a legacy stretching from his days on the junior circuit to his reign at the top of the professional rankings that may never be met again. Little did his mother know when placing Jack’s first racquet in his hand at their home club in Michigan more than 25 years ago that his career would amass 22 World Championships and 42 National Championships. Once becoming a full-time player on the International Racquetball Tour in 2000, Jack’s professional career would see him reach the finals in more than half of the events he entered.
While earning accolades on the court the past few seasons, Huczek was also earning grades in the classroom towards a Masters of Business Administration (MBA) degree from Oakland University. Jack’s degree will be put into play as he serves into a career in the telecommunications industry working as an Account Manager for Ericsson. Jack, his wife Christie and the couple’s daughter will continue to make the Dallas, Texas area their home. Huczek’s retirement is effective immediately and he will not be playing in the 2011 US National Championships this week in California.
“I’ve been presented with a great opportunity that will move my family into the next stage of our lives,” said Huczek. “I’ve been blessed to make a living playing the sport I love, but my focus now is on my new job. I’ve thoroughly enjoyed the last five years on the IRT with my partnership with HEAD/Penn. I appreciate the friendships I have made within the HEAD/Penn family and hope they will continue.”
Huczek’s first break through performance on the national racquetball stage happened in 1991 when he won the 8 & Under Division at the then AARA U.S. Junior Olympics Championships. For the next 12 years Jack would move up through the age divisions, winning each championship at least twice. While dominating the National Junior Championships, no one at the World Junior Championships had much of a chance either. From the 10 & Under Division in 1993 through the 18 & Under Division in 2002, Huczek was untouchable. When the rest of the world’s young racquetball players were finally able to see Jack leave the junior ranks once turning 19, his collection of World and National Titles would reach a staggering number of 41! Add in three collegiate titles and Jack owned the most impressive resume the game had ever seen as he began his professional career.
Jack would start playing fulltime on the IRT in the fall of 2001. During his first few months, the new rookie would take some of the top players on tour -- Carson, Maninno, Ellis, Monchik -- to four or five games. On January 27, 2002 in Boston, Huczek would reach his first professional final. He would go up against another racquetball legend in Cliff Swain and on his home turf. On that winter day more than a decade ago, Jack won his first of 29 tournament victories on the IRT. For the next 10 years Jack would remain ranked among the Top Five players in the World. At the end of the 2006-2007 season, he reached the top of that list capturing the coveted No. 1 spot on the IRT Year End Rankings. Yet again, Jack Huczek was at the top of the racquetball world.
"Although we are sad to be losing Jack from the full time ranks of the IRT and the HEAD/Penn staff we are thrilled for him and his family as he embarks on this exciting new chapter in his life. For the past five years we have enjoyed our partnership with Jack and witnessed his steady climb to the top of the sport,” said Doug Ganim, HEAD/Penn National Indoor Promotions Manager. “I have personally known Jack since he was 12 years old and have never met a harder working and determined individual. I have no doubt that he will conquer the corporate world just as he has done in racquetball."