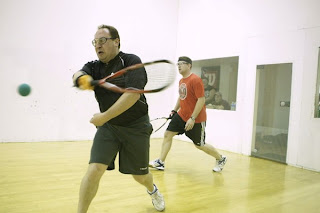 After Jenny Straszacker lost her battle to lymphoma, her friends decided to remember her in a very appropriate way.

Jenny Straszacker always had a smile for everyone. She was also a national champion racquetball player at Cor Jesu Academy and died last September from lymphoma.

Long-time friend of the Straszacker family, Thad Kemlage, wanted to celebrate Straszacker and keep her memory alive. And, what better way to do that than with a memorial racquetball tournament? He contacted Jenny’s coach at Cor Jesu, Dan Whitley, who is also a manager at Vetta Sports at its Old Tesson Road location. Whitley backed the idea all the way.

The tournament was held Saturday, and they’re hoping it will grow and become an annual event.

“She’s a timeless example for the girls on the team,” Whitely said. “She was one of the toughest and most focused persons I’ve ever known.”

They spread the word through social networking, beginning with Straszacker’s Facebook page. Through the Cor Jesu and De Smet racquetball and church communities, support for the tournament grew steadily. All the money raised heads to the Jenny Straszacker Scholarship Fund, which will be given to a graduating eighth-grade student from Saint Margaret Mary as she prepares to attend high school.

“We'll end up picking one or two students who best embody Jenny to win the scholarship starting next school year,” Kemlage said.

“Everybody wanted to do something, but what do you do?” Jenny’s father, Bob Straszacker, said. He said her friends wanted to keep her memory alive. This made sense because Jenny loved racquetball so much. “She was a friend to everyone. She was such a good competitor.”

“It’s a great tribute to use the money to give back to the community,” he said. “It’s the only way to make sense out of this situation.” All five Straszacker sisters went to Saint Margaret Mary and continued on to Cor Jesu while her brother went to De Smet.

All 10 courts at Vetta were busy from 10 a.m. until 8 p.m. Saturday. Seventy-five people signed up to participate, paying donations ranging from $25 to $35. There was also a silent auction and sponsors for each court. A kick-off event was held at Chevy’s on Tesson Ferry the previous evening.

Jenny’s mother, father and three of her siblings played in the tournament while two other sisters were on hand to help.

Whitley said Straszacker didn’t give in when diagnosed with cancer.

“She fought for us, so we’re going to play for her,” he said.