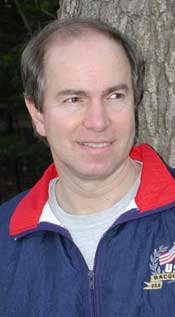 If you watch the U.S. Open golf tournament this week or Wimbledon next week you will see plenty of 300-yard drives and 140-mph serves.

Part of that is due to the fitness level and strength training of modern athletes, and part is due to the changes in equipment. The driver that Arnold Palmer used is tiny compared to the oversized drivers that today's pros and amateurs use. The same goes for tennis racquets. The wooden Dunlops and Donnays used by John McEnroe and Bjorn Borg 30 years ago had far less power than Roger Federer's Wilson, which is lighter and a third bigger in the head.

One of the first tinkerers in sports equipment was Memphian Randy Stafford, former racquetball pro and owner of The Court Company. Like tennis, racquetball was radically changed by progressively bigger and more powerful racquets. Some of his old friends jokingly call Stafford "the anti-christ" because of the changes he wrought. This little essay by Stafford, who was 17 years old in 1972, is about goofing around, innovation, and the limitless future of the young as well as the sport he has played for 40 years.

The First Oversized Racquetball Racquet: A Slice of History

I had no money to pay for my time with Dr. Bud Muehleisen, so I brought two ice chests on the plane with me full of bear meat that I just shot in Alberta. It was the summer of '72 and having just graduated from high school and moved there, I lost in the second round of the Klondike Open to Dr. Bud.

‘Come to San Diego and spend the rest of the summer at my home and playing racquetball,’ he urged.

‘Wow!’ I said, and showed up with the bear meat. I thought if I could not pay him at least I could cook for him.

My life changed forever that summer, but what does this have to do with the first oversized racquet?

After my arrival in San Diego, Dr. Bud hooked me up with a great southpaw named DC Charleston. DC was going to college and he picked me up in an old Volkswagen daily and we played at Mel Gorham’s and at the beach in La Jolla. DC was a top national doubles player with Charley Brumfield, the county’s smoothest beach runner, and could ‘Name that Tune’ of any rock-and-roll song after hearing two notes,

Racquetball was in its infancy and especially with equipment. I had just changed over from the Dayton Steele to the Muleheisen Ektelon racquet. Leach was also coming on as a popular racquet brand. So, basically there were two companies making racquets and both located in San Diego.

Both DC and I were playing with Ektelon's at the time, and we would sit around after our matches talking about the sport and invariably it wound around to every detail of the racquets. A racquet could make or break a player.

One afternoon DC said, ‘Lets go over to the Ektelon plant and look around.’ We arrived at a small metal building with a stringer machine being rolled outside so the stringer could enjoy the sunshine as he worked. Inside the door was a modest machine shop and we zeroed in on one guy bending aluminum frames for the Dr. Bud racquet. Overhead a dozen frames hung at the mid-point of fabrication, ready for the wood handles to be installed.

We walked out of Ektelon with one slightly longer racquet and off to the beach court to give it a try. It worked! It did allow us to hit the ball harder, so we made up a few more and used them through the summer. A few months later, a black Ektelon racquet came on the market called the Schmidkie XL.

The first oversized racquet was born and with it power racquetball
Posted by Mauro at 7:12 AM