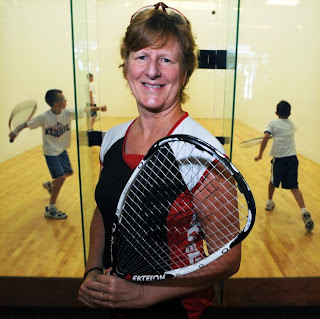 While Moore's main focus is growing and promoting the sport here, she's still a successful player on the national level.

After winning the women's 50-and-over singles titles at the U.S. Open last October and the Senior/Masters National Championships in January, Moore received the Peggy Steding Female Age Group Award during the USA Racquetball National Singles Championships in Fullerton, Calif., from May 25-30. The award honors outstanding performance by athletes older than 35.

When Moore found out in late April she was this year's Peggy Steding winner, it totally changed her plans.

"I had decided I wasn't going to Fullerton because I was having problems with my knee and really wasn't playing (racquetball) that much,'' Moore said. "But since I was getting an award, I felt like I had to go.''

Despite not being 100 percent, Moore still reached the semifinals and finished in the top four.

Moore, days away from turning 55, has been playing national tournaments for around 30 years. She's been battling the same core of players as they've advanced through every age group together, and friendships have developed through the years.

It's cordial, but also ultra-competitive. In the national singles tournament last year in Houston, Moore was a semifinalist in the 50-plus but won the women's 35-plus.

"Those 50-year-olds are tough,'' Moore said, laughing. "We typically have more players in our national tournaments than any other age group. We all started together in the '70s and '80s, and we enjoy the competitions and seeing each other year after year. My husband Harry and I like to use the national tournaments as vacations.''

Moore has been a pro at the Lincoln Racquet Club for 25 years, doing everything from teaching junior lessons and organizing leagues and tournaments, to stringing and selling racquets. She's also the club's membership director.

As president of the state racquetball association, she's the tournament director for six of the major annual events.

She's been the Cornhusker State Games racquetball director for 22 years, using it as a platform to promote the sport and bring in new players.

Moore teaches an activities class at UNL in which racquetball is part of the curriculum. She began playing racquetball as a student at Central Michigan University at the age of 19, so she knows the college setting is good for growth.

"With their high school sports over, a lot of people take it up in college and then stay with it because it's a lifetime sport that provides a great cardio workout,'' Moore said.

Moore doesn't see herself cutting back anytime soon. She enjoys her involvement locally and intends to keep competing nationally "as long as my knees hold up,'' she said.

"I'm totally immersed in it (racquetball),'' Moore added. "Racquetball in Nebraska has been steady for many years, and my job is to build off that and expand it.''