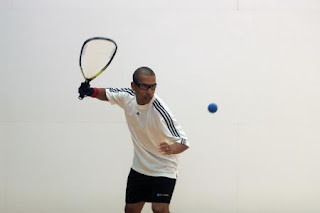 Paul Beeks, winner of the Kinser Open Racquetball Tournament, prepares to strike a racquetball warming up before the tournament at Kinser Fitness Center, June 25.

“The purpose of this tournament was to provide an outlet for racquetball players to meet and play new competitors with a similar interest in the sport,” said Otis C. Miller, a sports coordinator with the Marine Corps Community Services Semper Fit program.

The Semper Fit facility hosts three tournaments every year at the racquetball courts.

“Playing racquetball is a good way to stay aerobically fit,” said Brian K. Trievel, a competitor in the tournament. “The key is to hit the ball so that the ball bounces off the wall at an angle that will send your opponent running.”

According to Trievel, maintaining a position in the center of the racquetball court is crucial to the sport because the small court space affords no room for mistakes.

To score a point in racquetball, a server must cause their opponent to bounce the ball twice before the opponent returns the shot. If the ball bounces twice during the servers’ possession, then the server position is switched.

In their first match, Paul Beeks, a competitor, trumped Trievel in a 15-10 game. Trievel moved up in the semi-finals to compete against Beeks once more, but fell behind after losing to Beeks 15-12.

In the end, Beeks reigned victorious, claiming the title of tournament champion.

“It feels good to win,” said Beeks. “It takes a lot of endurance to play in a tournament like this.”