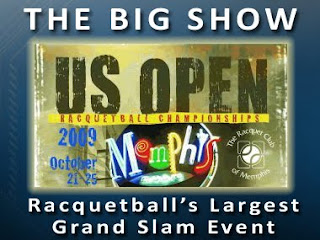 The 2009 14th US OPEN Racquetball Championships will be held October 21-25, 2009 in Memphis, TN at the Racquet Club of Memphis and will feature all of the top men's players of the International Racquetball Tour (IRT), the women's players of the Women's Professional Racquetball Organization, (WPRO) and the Classic Pro Racquetball Tour (CPRT). The US OPEN is racquetball's original and largest "Grand Slam" event and the most prestigous tournament of the season. The event will also offer amateur divisions for men and women and attracts players from all across the world.
Last year, nearly 70 US OPEN champions were crowned and awarded the one-of-a-kind US OPEN gold medal that weighs nearly 2 pounds. Leading the entry list for the IRT is world No. 1 Kane Waselenchuk, defending US OPEN champion. Leading the women for the WPRO is world No. 1 Paola Longoria also the defending US OPEN champion. The Classic Pro Racquetball Tour (CPRT) will also feature Jimmy Lowe who will attempt to defend his US OPEN championship.

Don't miss out on this exciting event as all of the top professional racquetball players in the world will be playing on the new four wall Lucite racquetball court.
Posted by Mauro at 12:42 PM