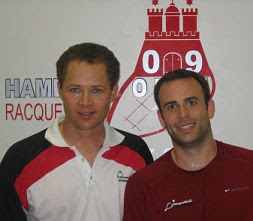 Vincent Gagnon from Canada is the winner of the 26th Hamburg Open 2009. he defeated Germany's Trevor Meyer with 15-3, 15-9 to win his first European title ever. Yvonne Kortes (Germany) claimed another Hamburg Open victory by defeating teammaid Lara Ludwig.

In mens doubles, former European Doubles Champions Trevor Meyer and Joachim Loof were once again a class of their own; they defeated Marcel Mein and Torsten Krieger in a one-sided doubles final with 15-4, 15-6.

The 2009 Hamburg Open were the first event of the 2009/2010 European Tour and also the first event that used the Ektelon Classic Ball as the official tournament ball. Ektelon and the European Racquetball Federation have recently signed an official ball contract and at this years premiere in Hamburg the ball was well received by the great majority of the players, tournament organizers daid.

Full draws can be found at http://www.hamburgopen.racquetball.org
Posted by Mauro at 12:36 PM