News from Germany-8th title for Martin Klippel at German Nationals 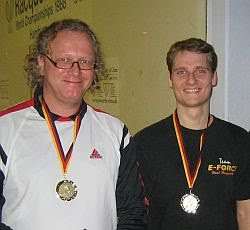 Hamburg's Martin Klippel is the winner of the 29th German National Championships that were held last weekend in Hamburg. Klippel defeated Oliver Bertels (also Hamburg) 15-10, 15-11 in an exciting final to claim his 8th National singles title. No other male player has ever won the German Nationals more often: Jörg Hanold won the Singles title seven times in a row (1983-1989) while Joachim Loof earned six singles titles in his career (1991-1993, 1995, 2000, 2001).

This years' German Nationals have been extremely successful with more players than in recent years, especially in two junior divisions but also in a C/D division that attracted many local players that usually would not compete in a national event.

All finals and finishers: