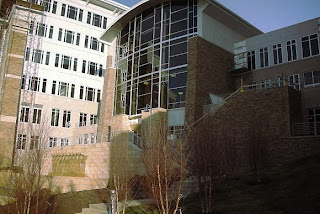 After three years of design and construction, Dick's Sporting Goods plans to fully occupy its new corporate headquarters by the end of February.

Employees are starting to move in now; about 1,200 Dick's employees will occupy the space initially.

The $150 million, 670,000-square-foot complex occupies 116 acres of land beside the main runway at the Pittsburgh International Airport in Findlay. The center is the first phase of what eventually could be a 2 million-square-foot complex.

The complex, which is pursuing LEED certification, includes a large hanger for the company's fleet of jets, as well as extensive recreational facilities and amenities for the staff. Highlights include a full health club with a basketball court, a couple racquetball courts, exercise machines and a running track as well as outdoor basketball courts and an outdoor soccer field and baseball diamond. There are also walking trails around the site, and a large lawn where Strada architect Edward Shriver says Dick's market researchers will be able to test equipment sold in the stores.

"There's a very healthy lifestyle sort of culture at Dick's," says Shriver with Strada. "When we talked about the space itself, their idea was stadium meets lodge, so we used a lot of stone and wood elements to achieve that. And it was important to us to make a connection between the inside and the outside. The waterfall-like fountain in the every-season hall goes outside and feeds into one of the existing streams in the area, and from the hall there are views into the woods and out over the lawn."

Dick's most recent former headquarters was about 200,000 square feet, says Shriver. "They were completely filled, converting filing and copy rooms into offices. They knew they needed more space. Dick's growth over the last 10 years has been phenomenal. They decided to make this 2 million-square-foot masterplan to make sure they have enough room to keep growing."