Teaching Mechanics and Joys of the Game 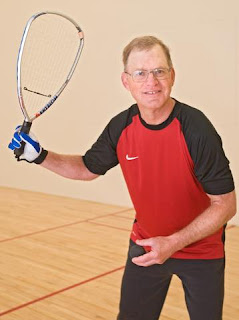 Roy Angleberger teaches racquetball at the YMCA in Frederick.

To Roy Angleberger, the members of the racquetball league at Frederick's YMCA are more than just players.
"I call them my racquetball family," Angleberger said.

And it's a large family. Over the past five years, Angleberger has helped the racquetball program grow from 8 players to about 100.

He knows who's left-handed, who has kids, who works where.

At Gov. Thomas Johnson High School, he played baseball, basketball and football. He continued playing baseball and football at Western Maryland College (now McDaniel College). Today he works part time at Glade Valley Golf Club and at the Y for the racquetball program. He organizes league matches and tournaments and gives private lessons.

Angleberger said racquetball is a sport for anyone -- those in his league range from age 7 to 70. Both men, women and children play. All you need is a racquet, a ball and a pair of goggles, he said.

The league is confined to three glass courts in the basement of the YMCA building down a long maze of hallways. Air conditioning runs at full blast to keep the glass walls from perspiring.

Karen McKinney of Frederick took up racquetball in place of running on treadmills and ellipticals. She also enjoys the break a game of racquetball gives her from her twins.

"It's a great place to take out frustration," she said.

Angleberger agreed. "I know after work hitting that racquetball is enjoyable," he said.

Sarah Godwin, who has been playing for 31Ú2 years, is now playing in the men's league with help from Angleberger.

"He's a superstar. He really is," Godwin said.

After retiring, Angleberger decided to take the job as the racquetball coordinator at the Y for fun.

More than anything else, he said email helped him expand the program by giving him an easy way to communicate with members. He now has about 350 families on his mailing list.

As the league grows, the competition gets tougher, and players want to improve, so Angleberger ends up giving more lessons -- 100 so far this year.

Although he enjoys playing racquetball, after spending years working with reluctant students in gym class, teaching people who really want to learn is rewarding, he said.

"I love to play, but I love to give lessons even more," he said.

Teaching seems to runs in the family.

Angleberger's son, Mark Angleberger, is a physical education teacher at Tuscarora High School. He coaches football there and tennis at Walkersville High School.

Angleberger's wife, Barbara, is an assistant professor of psychology at Frederick Community College and chairwoman of the social sciences department. While she's not a gym teacher, Angleberger said she loves sports.

As for how long Angleberger plans to stay with the league, he said the answer is simple. "As long as I can hit a racquetball, I guess," he said.
Posted by Mauro at 7:17 AM